Gold Rush for Great Britain – Six in One Day!

Team GB won six gold medals and a silver on Day Eight of the Olympics, taking the Great British Goldrush to 14, with 7 silver and 8 bronze. Super Saturday marks the UK’s best performance in the Olympiad for over a century. The crowd in the stadium went wild as Mo Farah and Jessica Ennis stole the show. There’s a wonderful sense of pride in Britain tonight, not least because we are the host nation, and on every television there are tears of joy, shock and awe as the athletes realise their own achievements.

Kind of makes up for the Japanese complaints about their gymnastic placing, depriving Britain and the Ukraine of their original medals. Japan, you were really crap. (So much for good grace and sportsmanship…)

The stunning culmination of the London 2012 Olympic Games Opening Ceremony, as the torch lights the cauldron, seen here from inside the incredible structure. I had to pause my TV and snap this on the iPhone.

Are the Olympics Absolutely Fabulous?

Patsy and Eddie speak for the nation! 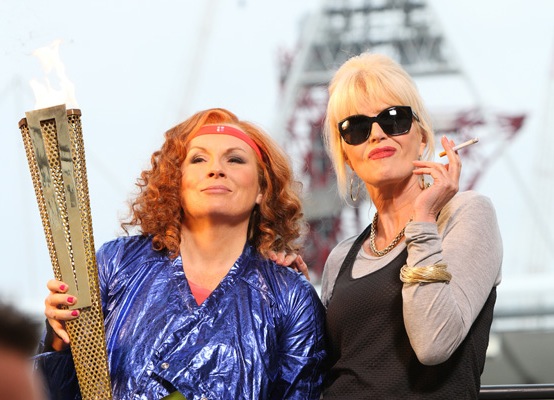 In this week’s excellent Olympic Games Special, Patsy Stone and Edina Monsoon eloquently voiced the real feelings of the British people about the biggest event in the history of London. Yes there’s a lot of flag-waving and it’s great for tourism, but it’s a whole different ball game when you actually live here.

Eddie and Patsy present their pre-Games make-over plans to Saffy.

Eddie “We’re gonna be liposuctioned, lasered and lifted, darling. I’m going to be wearing my buttocks as a head rest by the time…”
Saffy “Well you better hurry up because it starts this week.”
Eddie “What?”
Saffy “The Olympics.”
Eddie “What? No! [to Patsy] Darling did you know it started this week?”
Patsy “What?’
Eddie “[panicking] The…running-the Olympics!”
Patsy “Where?”
Saffy “Oh my god! How could you have missed it? Even coming from the airport – it’s everywhere!”
Eddie “Yeah, darling, it’s been ‘everywhere’ for FIVE BLOODY YEARS, hasn’t it? Excuse me if I missed that it actually started! It’s been like tinnitus!” 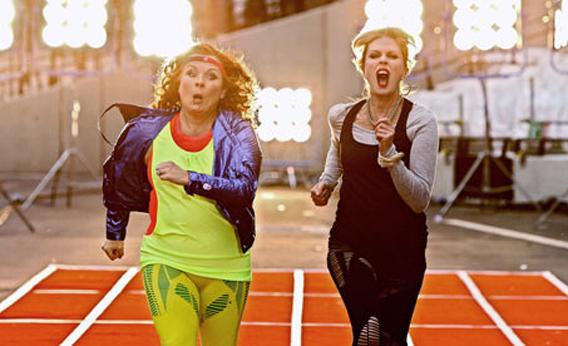 Patsy and Eddie find themselves in the Olympic Stadium just days before the big day.

Patsy “It’s empty.”
Eddie “That’s cos nobody could get tickets, isn’t it darling?”

Perhaps the best quote of all is Eddie’s Mother, staring bemused at some unused tickets…

Mother “I don’t see why anyone would actually want to be there when they can watch it in comfort on the good old Auntie Beeb.”