Posts Tagged With: The Days of Anna Madrigal

The Days of Anna Madrigal: Review 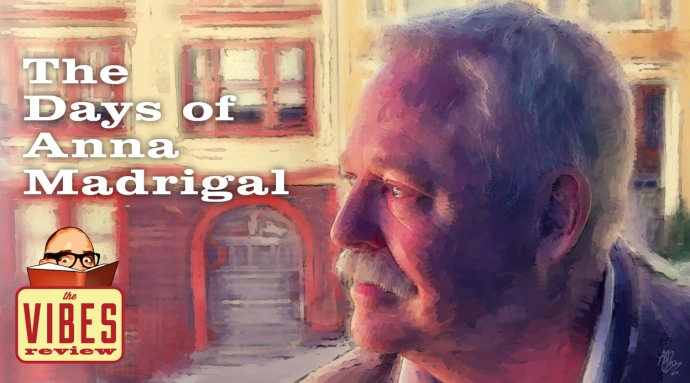 The curtain comes down on Armistead Maupin’s Tales of the City series with the final novel, The Days of Anna Madrigal. It’s a gift to the loyal followers of nearly forty years of bohemian Barbary Lane.

Nine instalments after Mary Anne Singleton let her Brady Bunch hair down, it’s reassuring to dive into the warmth of Maupin’s Logical Family, even if we sense that this is not going to be a Thanksgiving Dinner with old friends. The hint is in the opening chapter, where Mrs. Madrigal tries to light an electronic candle with a lighter. ‘So this is the end of candlelight?’ she asks, immediately illuminating the magic of Maupin’s writing and his fascination with technology and the changing world around us. Here, the mysterious transgender matriarch is placed exactly where a sparky ninety-two year-old would be: adapting to the passage of time.

Almost from the start, a psychedelic reverie leads us on a journey to the past to meet Andy Ramsey and the truth about Anna Madrigal, revealed in a kaleidoscope of flashbacks.

Back to his mother’s brothel in Winnemucca, and back to the 1940s to discover exactly who this 17 year old boy really is. For me it’s the most important part of the novel. Andy Ramsey, neither gay man or cross-dresser, embarks on his first romance which ultimately describes the complications of being a woman trapped in a man’s body. Meanwhile, the trembling scenes of first love are truly electric, rendered with adrenaline and hormones against a backdrop of glittering detail: ‘Down the railroad tracks red and green lights were blinking like lost pieces of Christmas.’

It’s almost understood that there will be tragedy in a book like this, but it comes from surprising shadows. ‘I was a weasel of a man,’ said Mrs Madrigal, once upon a time, but a dark secret adds a new dimension to such a well-loved character, a new depth and a degree of explanation. The only resolution lies in the present facing up to the past.

The mission of the monarch is just one ribbon, woven into the current trajectory of familiar faces, as Shawna, Michael and Ben prepare for The Burning Man, the pagan pinnacle of the novel. As Brian and his new wife head off in the opposite direction, it’s guessing game to see how Maupin might bring his Logical Family together for one last chapter. Luckily, we get to join most of our favourite characters on the roller coaster as Maupin nods to a legacy that stretches back to 1976. The climax is a hedonistic circus of creativity and colour, the perfect destination for the spirit of the Tales series.

All roads lead to home, even if there are some unexpected twists and a particularly nasty bump for Michael Tolliver, playful pup turned grumpy gardner. Maupin still knows how to blow our socks off as he foreshadows the grand finale with ambiguous plotting. If there’s one thing you can’t accuse him of, and that’s being obvious. Think you can guess the ending? Not until the last line, and even that might be a mystery in itself.

The Days of Anna Madrigal by Armistead Maupin is published in the UK today. This is the last episode in the famous Tales of the City series, and anyone who follows The Vibes will know I’m slightly obsessed with the compulsive chronicles of San Francisco.

A few years ago, at a Manchester book signing, I may have planted the seed of this novel by suggesting that Mr Maupin wrote more about his ingenious character, Mrs Madrigal. He visited this very blog and said I could have been an influence! Of course I’m not claiming any credit, I’m just very happy to be holding this wish-list book in my hand.