Posts Tagged With: It Overtakes Me

Is it Safe to be Gay in the UK? 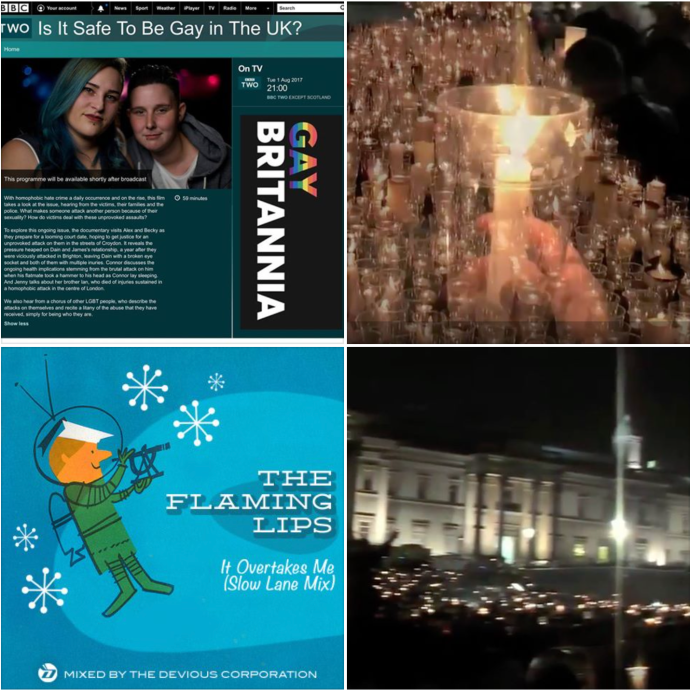 Tonight on BBC 2 at 9pm you can see is It Safe to Be Gay in the UK? I made a small contribution to the programme after the Beeb asked if they could use my film about the murder of Ian Baynham in Trafalgar Square. To see if I make the edit, watch tonight! And I guess we should all remember that the fight is never really over. Always be aware and stay safe, people! (watch my short clip here complete with my remix of Flaming Lips https://youtu.be/4T_x_75A4yw )

It’s that time of year again: Trafalgar Square in London becomes a sea of candles, comedy and choirs. Originally held in remembrance of Ian Baynham, a man who was kicked to death for holding his boyfriend’s hand in public, the Vigil is growing in prominence and has backing from celebrities, police and the Prime Minister. It’s the most uplifting and life-affirming experience, and if you’re in London, please go down and show your support. Thousands go each year, but the more people who attend, the more the world will listen. This is hugely important in the week that rabid right-winger Nick Griffin calls for homophobia to be decriminalised.

I made this short clip in 2009 and it shows you just how magical the Vigil can be. The soundtrack is an exclusive remix of a poignant Flaming Lips track, The Stars Are So Big, I Am So Small…Do I Stand a Chance? (It Overtakes Me) which I produced specially for the clip. I’m especially proud that this video was used to help secure funding and charitable status for the 17-24-30 No To Hate Crime organisation who campaign tirelessly for justice, human rights and equality.

Like Loading...
Categories: Music, Random, Video | Tags: 17-24-30 No To Hate Crime, Candle-Lit Vigil, Gay, Homophobia, It Overtakes Me, Mark Wallis, remix, The Flaming Lips, The Stars Are So Big...I Am So Small...Do I Stand A Chance?, The Vibes, Trafalgar Square | 12 Comments

It Overtakes Me – The Flaming lips (Slow Lane Mix)

It’s a huge cosmic sigh, the sound of a man staring into space trying to make sense of it all, and also the sound of me in the bath (stop laughing please, this is serious) imagining new layers to a stark track which needed some starlight. Originally the second half of the single It Overtakes Me, which you may remember from the famous beer commercial (Beck’s 4-Step), The Stars are so Big…I am so Small…Do I Stand a Chance? was the celestial second act which contrasted so much with it’s brother. I took the acoustic guitar from the end and built the whole track around it, taking samples of vocal and making them echo in the style of 10cc’s I’m Not in Love. I also played the flute over most of the song, resulting in richer, warmer layers of sound. As far as I know, I’m the only person to remix this track.

Taken from The Cosmic Jukebox, my remixes, mashups and original music.

Like Loading...
Categories: Music, Random, Vibe Monitor | Tags: Devious Corporation, It Overtakes Me, Music, psychedelic, reflections. miscellaneous, remix, rock, Slow Lane Mix, spirituality, The Flaming Lips, The Stars Are So Big...I Am So Small...Do I Stand A Chance? | 2 Comments
Designed by Mark Wallis. To purchase prints and see more of my photography and designs, visit www.markwallisdesign.com