The Making of X

Or how to make an oil painting in two minutes. Just film 3 weeks’ work and speed it up! Is it blasphemy or bondage? See more here.

Mark of the Cross People

For the first time in 15 years, I’m painting again, exhibiting my work at the Sin In My Heart show in Manchester. Once upon a time, in Amsterdam, I had one of my oil paintings up in a sex shop. But as our curator, Paul Darling remarked, nobody goes to a sex shop to look at the art! When word went out that the theme of the new exhibition was sex, death, sin and religion, I put myself forward as a contributor. How could I not? 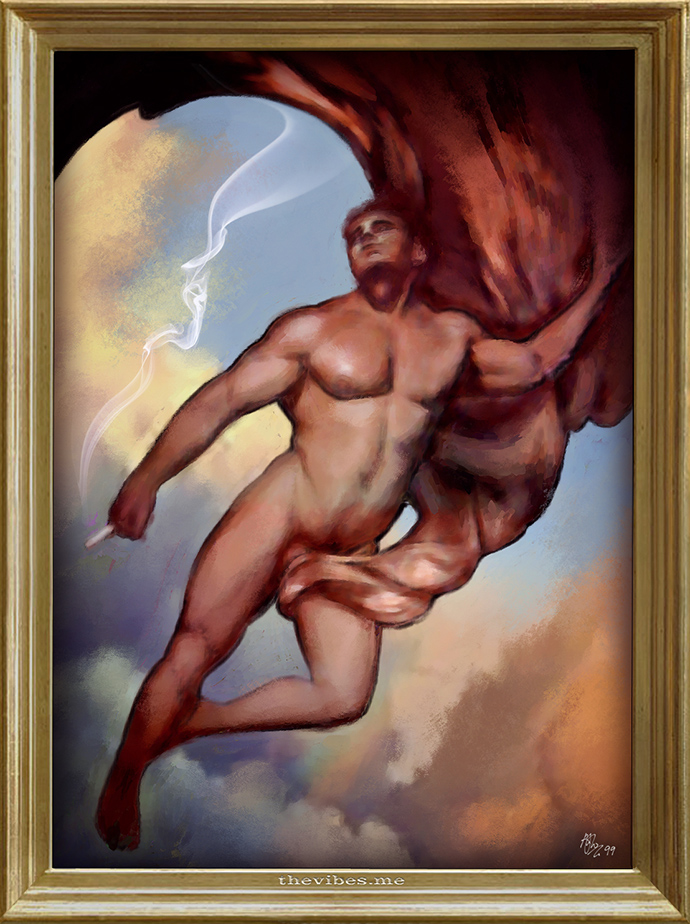 In the spirit of the New Year, I’m going to show you something I created way back in 1999. Dreamy and windswept, it represents the breath of fresh air and the freedom I found when I emigrated from the dull greyness of Manchester to the electric circus that was pre-millenial Amsterdam. My head was firmly in the clouds as I flew to the ancient, crumbling city – impossible pioneer at the frontier of dreams. Of course my adopted spiritual home was a succession of wild adventures and not the elegant paradise which I’d hoped. Serenity and enlightenment were trumped by excess. When the excitement reached fever pitch, we appealed for sanity and packed our things, heading back to the calmness of old England. After an epic two years we returned to Manchester with fantastic and alarming memories. And sore heads.

Dope Angel was originally a paper collage. I tore model Steve Kenney from an old copy of Zipper magazine and cut him to pieces. Using an Estée Lauder advert from Vogue, I added the sort of renaissance-style background which best described my romanticised view of the world. Photoshop was unknown to me: the cut and paste involved actually getting your hands dirty. It’s funny how I manipulated the flowing silk and muscular limbs in exactly the same way with scissors as I would now with digital wizardry. The only difference was that I only had one copy of everything – so there was no room for mistakes. Limitation is the mother of resourcefulness, as I learnt.

Somehow I managed to preserve my work as a grainy photograph, and then promptly lost both the original and the photo. Like many artists, creating stuff comes naturally, but archiving your own work doesn’t. Paintings would be left in strange places and forgotten in favour of the next big project. Usually, nothing got finished. So there was always a post-it note at the back of my mind, saying “Find Dope angel and finish it, fool.” One day I found my ancient, rusting laptop which hadn’t been used since I was abroad. How I managed to get it working is beyond me: Widows 97 is like a history lesson of creaking hard drives and lego graphics. It would take 30 seconds to open a single picture, but there it was: Dope Angel! With all the finesse and clarity of a Roman mosaic. You could almost see the curling paper layers. Unfortunately my love of quality was challenged even further when I realised that I couldn’t extract the image because the laptop was obsolete tech. I had to take a picture of the tiny screen!

Originally it was meant to look like an old oil painting, so I fed the image into Photoshop to restore some detail and then produced a digital painting from the remaster. After 15 years, I finally finished my little collage. Hope you like it, and have a Happy New Year. For 2014 I resolve to speed up my productivity.