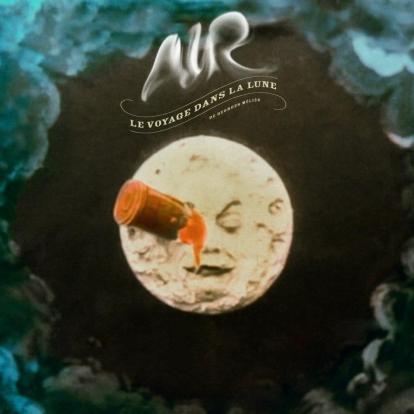 Listen to the full album here ahead of tomorrow’s release.

Watch a clip from the movie here.

Released in 1902, this legendary 16-minute film is widely considered one of the most important works in film history, and the very first to use science fiction as its theme, incorporating special effects that were very state-of-the-art at the turn of the 19th century. It was loosely based on two popular novels of the time: Jules Verne’s ‘From the Earth to the Moon’ and H. G. Wells ‘The First Men In The Moon’.

A hand-coloured print, the only one known to survive, was rediscovered in 1993 by the Filmoteca de Catalunya. It was in a state of almost total decomposition, and many years of painstaking, manual restoration took place until 2010, when digital technology finally came to the rescue. Following another year at the Technicolor Lab of Los Angeles, it was finally ready to share with the world. Eager to put a contemporary spin on this classic silent film, the producers decided to approach AIR’s Nicolas Godin and Jean-Benoit Dunckel, to compose an original modern soundtrack, an enormous honour for French musicians, considering the film’s place in the canon of French cinema.

Spurred on by their work on this short movie, AIR decided to develop the project into a full album inspired by the film. Expanding the original musical themes beyond cinematic instrumentals, the album also features the vocal talents and lyrics of Au Revoir Simone and Victoria Legrand (Beach House). The band’s lunar fascinations have been evident since the beginning of their career with the release of the seminal 1998 classic Moon Safari. Now in 2012 Nicolas and JB have returned to explore the further regions of their very unique musical “space.” From en.aircheology.com.